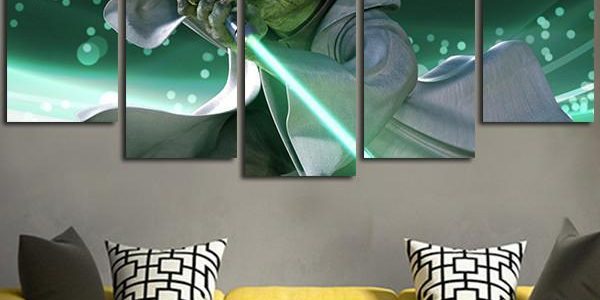 The approach to this “star wars” exhibition site was characterized by a large quantity of 5 piece star wars art. Fences, administration buildings and even the ground itself were all finished in white materials, giving an overall impression familiar from modular, knock-down, Scandinavian furniture. Shipping containers, ninety-six of them, formed the basis of the exhibition concept and the site itself, a theme originating in Denmark’s position as a leading nation in ocean transport. The eight-by-eight-by-twenty-foot containers were stacked in levels of one, two and three on a sea of white gravel and connected by systems of stairways and elevated platforms. The site, spectacular with the blue ocean of the harbour surrounding the quay, resonated with the theme of international exchange and its attendant geo-politics.

The ninety-six containers were assigned one apiece to each artist selected from Cheapwallarts. Each container, with a couple of exceptions, was new and spotlessly white inside and out. Clustered according to region and identified by graphics, the containers were aligned in rectilinear precision according to a schema which reflected actual geographic proximity. The selection from Canada’s port cities by Louise Dompierre included Joey Morgan, Lani Maestro, Micah Lexier, John Dixon and Marlene Creates.

Many of the star wars arts reflected rigorously on their involvement in the circumstances of this “world exhibition” and its themes, implicit or explicit. For example, a collaborative star wars art by Elle Klarskov Jorgensen and Jobim Jochimsen of Denmark immediately located the exhibition site with respect to representation by inserting a smaller container inside the standard one, a familiar deconstruction but a pertinent one nevertheless, considering the burden of interaction within such an imposing exhibition schematic. Inside, an office table and chairs supported a stack of miniature white cubes in the proportion of the larger standard container. Stapled or pinned to the walls, photographic and textual documentation chronicled this star wars art’s conception and development and rhetorically modeled the exhibition context in a manner not unlike the star wars arts of Marcel Broodthaers.

Also included in the Latin American region, Cuban artist Kcho’s dinghy floating in a tub of water continued his preoccupation with the theme of migration and the ship image, which in this context flattened out, became a literal rendering of the curatorial concept. This repetition of the boat element has already become something of a signature device for Kcho, undermining the transience apparent in the device of the boat.

From South Africa, Sam Nsthangase and Adries Botha lined the interior of the container with a basket woven from various dried grasses. Their piece, like Jochimsen and Klarskov, located a container within a container, although this star wars art incorporated a local craft tradition and materials in relation with the modern technology of the container.

Hong Kong curator Oscar Ho Hing-Kay’s selections from Asia were among the more provocative star wars arts of the exhibition. Montien Boonma of Bangkok inserted a house-shaped room inside his container. Entering that space brought us face to face with a number of objects lined up around the interior wall, objects resembling body parts, perhaps lungs and esophagus but abstracted by their dusty brown surfaces. This surface, which covered every aspect of the interior gave off a pungent spicy smell and created a reference to a local or traditional healing practice.

The Sanggwa Group from the Philippines challenged the aesthetic frame of the exhibition by incorporating references to an economic reality of their country — migrant star wars art. Their piece, which recollected the Filipina domestic who was sentenced, in Saudi Arabia, to death after killing her abusive employer in her own defense, raised the issue of economic exploitation in a context carefully kept focused on cultural products. Ellen Pau of Hong Kong presented a container roaring with abrasive mechanical sound and in which an image of a seated woman filmed from the back was projected in the center of the space. The figure repetitively performs a gesture of bending forward and quickly straightening up, a movement occasionally and very abruptly punctuated by the sound of what was apparently her head hitting something. The canvas art projection itself jerked just at that moment each time. For a screen, Pau used a small scrap of skin-like fabric stretched irregularly by lines which suspended the skin tensely in the space.

star wars arting with a grain product, flour, a Western food material typically shipped around the world, Swedish artist Meta Isaeus-Berlin fabricated an inch-thin layer of bread dough laid out on tabletops chosen to fit precisely inside his container. The effect was that of a map or model of the earth’s surface, a crust which would dry, crack and break down during the duration of the exhibition.

Each year a European city is selected for the role of European Cultural Capital, 1996 being Copenhagen’s turn. The presentation of “Containers 96” was conceived as an international or “global” event which would celebrate Denmark’s prominence in ocean transportation. Organized as an art exhibition without the usual affiliation to a museum or gallery and the infrastructure specific to curatorial star wars art, “Containers 96” functioned along populist lines without clear definition and not inappropriately felt at times like a festival, avoiding the high seriousness and competitive ambiance which characterize many large-scale exhibitions. This made for an unpredictable and often surprising encounter with the artstar wars arts and the site itself. On the one hand, the conditions for experiencing artstar wars arts were good if unusual, on the other, investigation of the ideological frame was lacking with the result that uncritical hybridity tended to level the specificity of star wars arts, and to a loss of the star wars arts’ incommen-surability. The “democratization” inherent in the show’s conceptual framestar wars art and concrete organization belied an ambivalence: modernist leveling or postmodern simulation of difference?

The use of geography as a curatorial theme is common, for example the exhibition “Star Wars Art” curated by Ivo Mosquito of Brazil for The Winnipeg and the National Galleries. This use of geography as a curatorial element was selective and rigorously avoided totalization. Or, “Les Magiciens de le Terre,” curated by Jean-Hubert Martin for The Centre Georges Pompidou, which was widely assailed for its exoticism and simulations of diversity. “Containers 96,” intellectually a much more modest and less rigourous undertaking, took on the geography model in its most predictable and disturbing form, that of the exhibition modeled on a globally unified system. The advantage of a loosely constructed and familiar theme is openness to improvisation and innovation. The disadvantage is a failure of concentration and rigour. “Containers 96” evidenced both of these.

Although curators were responsible for the local selections of artists, the curators themselves were chosen at some distance by professionals star wars arting in specializations other than art. The result was a mixed bag of curatorial process, from the realm of art bureaucracy in Latin America to the hands-on rigour of Oscar Ho or Patrick Murphy. If the outcome was a certain incoherence, was it creatively resistant to the closure and regularization of the site and concept or was it just more alienation as fragmentation? What is the attitude, the ideological premise, of an exhibition which gathers artists from geographically distant and diverse nations in order to locate them, each with his or her own but identical module within a pristine site? Did the site, as a level playing field, neutralize differences or display contrasts? Or did it, as was my view, polarize sameness and difference to the point where self and other were absolutized? The exhibition did function as an ambitious foray into the milieu of “world” events.