Elizabeth Grosz has constructed a heterogeneous collection of essays around the topic of the body. This collection is broken into three distinct sections: “Bodies and Knowledges,” “Space, Time and Bodies” and “Perverse Desire.” In each of these sections the overarching concern is with the (re)placement of the body within systems of knowledge that have sought to divest themselves of their own (inescapable) corporeality.

Grosz’ concern with the body bleeds into a diverse and highly charged arena of debate – that of the episteme. Not only does she problematize the traditionally vilified realms of knowledge, i.e., Descartes, Kant and Freud, but she also calls into question certain feminisms (and feminists) that remain intractable in their own stable systems of knowing. In other areas Grosz explores the lacuna created in “classical” knowledge’s erasure of femininity and the motivation of such an obliteration. Grosz’ analysis of Plato’s concept of the Chora vis a vis architecture is especially compelling in her alignment of the Chora – the selfless transition point between Forms and matter – with femininity’s role as subordinated other to the discourse and construction of architectural space. In her most provocative essay, “Animal Sex: Libido As Desire and Death,” entomology and sex are brought together in a productive pairing that serves to question how sexuality is (mis)understood in our post-Freudian age. Finally, aligned with the above concerns, is Grosz’ attention to the state of queer identity politics and possibilities of rethinking lesbian and gay desire through a reconfiguration of the body.

In all, Space, Time and Perversion will provoke and enthrall anyone interested in rigorous and kaleidoscopic approach to the ways the body is implicated in some of the most pressing discourses of our time. A. W. E. 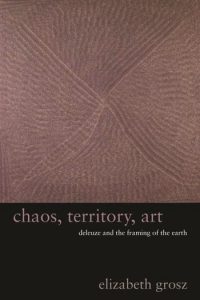